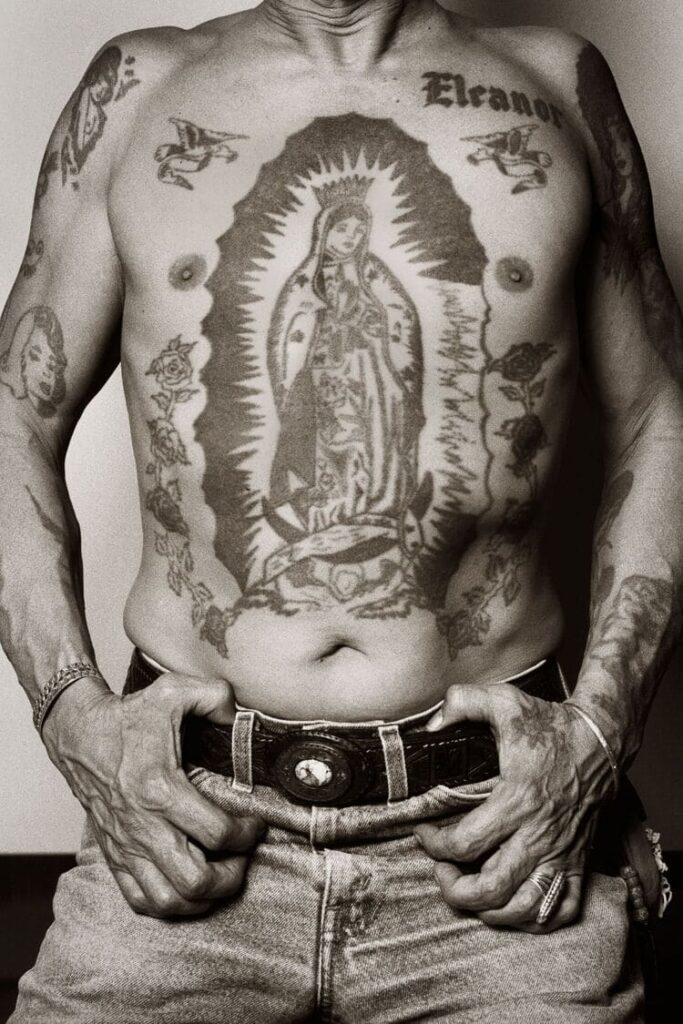 Back to Exhibition | Regresar a la exposición
Raúl Salinas,
1987

In the late 1980s, I was regularly taking photographs for the Guadalupe Cultural Arts Center, and Juan Tejeda was putting together the annual Tejano Conjunto Festival for the Center. He had started a Hall of Fame award program, and he and another man brought the new trophy over to my studio so I could take photos of it. While I was taking the photo, I mentioned that I was doing a series of photos for a Virgen de Guadalupe exhibit put together by Kathy Vargas, the visual arts director for the Center. This was going to be the first exhibit of my photography as ‘art’, and I was very excited about it. Kathy had given me a new way of looking at my photography. The man who was there with Juan said to me: “You should take a photo of my tattoo.” He took off his shirt and he had this great tattoo of the Virgen. But the story behind that tattoo was even better.

The man with the tattoo was Raúlsalinas, the prison poet. Salinas was born in San Antonio and got into trouble with drugs, spending about fifteen years in federal prison. But while he was in prison, he got an education and began writing… When he was finally released, he got his college degree, taught at UT, opened a bookstore in Austin, and became really well known for his poetry and his political activism.

This tattoo was done while he was in prison. Notice the aura around the Virgin—it’s incomplete on the right side. He told me that was because he got released before the tattoo could be finished.

I must not speak Spanish in the classroom.

I must not speak Spanish on the schoolgrounds.

I must not speak Spanish.

I must not speak.